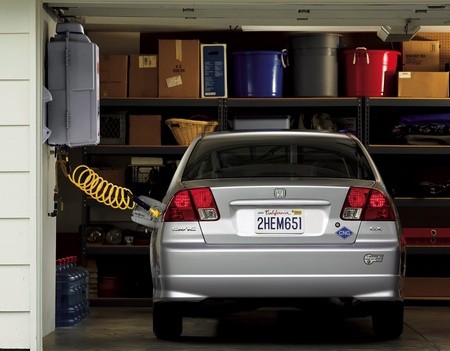 Eaton Corp. and General Electric Co. are working on competing projects to develop a $500 home natural gas fueling station, a product that could entice car owners to switch to a fuel whose price has plummeted because of shale drilling.

The companies’ efforts are part of a U.S. Department of Energy push to reduce the cost of such stations, which can sell for more than $5,000, and the time it takes to refuel as a way to attract more people to drive vehicles powered by compressed natural gas.

An affordable CNG station for homes could “revolutionize” how Americans commute, Dane Boysen, director of an Energy Department program to encourage use of the fuel in vehicles, said in a statement from Cleveland, Ohio-based Eaton.

“My hope is that these advanced technologies will enable us to use our abundant domestic supply of natural gas for transportation, diversifying our nation’s fuel and refueling portfolio for the future,” he said.

CNG is selling at retail for the equivalent of about $2.09 per gallon of gasoline, according to Oklahoma City-based Chesapeake Energy Corp., one of the nation’s largest producers of natural gas. Monday in Tulsa, the most common price of regular-grade gasoline was $3.39 a gallon.

Eaton said its technology will tap into a home’s existing natural gas system. The company is developing the home station with the University of Minnesota, funded in part by a $3.4 million Energy Department grant. The company said it will draw on its experience installing electric-vehicle charging stations across the nation.

GE said last week that it’s working with Chart Industries Inc. and the University of Missouri to develop a fueling station. The Fairfield, Conn.-based company received a $1.8 million Energy Department grant, according to Todd Alhart, a GE spokesman.

The Energy Department is also funding projects including storage tanks being developed by Ford Motor Co. and United Technologies Corp. in separate efforts.

Thanks to drilling technologies to recover the natural gas from shale rock, the market price of the fuel is about 80 percent lower than four years ago. Monday on the New York Mercantile Exchange, natural gas rose a penny to finish the trading day at $3.09 per 1,000 cubic feet.​

This article was first published by Tulsa World.

The German Ministry of Transport, Building and Urban Development has signed a joint Letter of Intent with several industry partners to expand the network of fuelling stations from current 15 stations across the country. The letter forms part of the National Innovation Programme for Hydrogen and Fuel Cell Technology (NIP), in which Germany’s federal government will work with its partners; Air Liquide, Air Products, Daimler, Linde and Total Germany to expand the public network.

The German government’s own NOW GmbH (National Organisation for Hydrogen and Fuel Cell Technology) will coordinate the construction of the filling stations. The network of hydrogen filling stations accompanies the introduction of fuel cell vehicles that the automobile industry has announced for 2014/15. 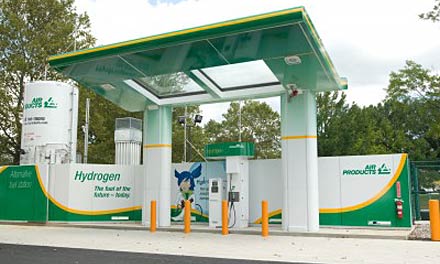 Partner, Daimler plans to be the first carmaker to start full commercial production of hydrogen fuel cell vehicles, with plans to launch the Mercedes-Benz B-Class F-Cell by 2014.

Dr. Peter Ramsauer, Federal Minister of Transport, Building and Urban Development, said: “Electric vehicles equipped with hydrogen fuel cells generate no harmful emissions. They also have a high range and can be refueled within minutes. To facilitate their introduction to the market, we need a network of filling stations that covers the major metropolitan areas and connects them to each other. We are therefore partnering with the private industry to setup a total of 50 hydrogen filling stations in Germany by the year 2015. By doing so, we create the basis for a demand-driven infrastructure for refueling hydrogen vehicles.”

Prof. Thomas Weber, Member of the Board of Management of Daimler AG, responsible for Group Research and Mercedes-Benz Cars Development: “Electric vehicles equipped with a battery and fuel cell will make a considerable contribution to sustainable mobility in the future. However, the success of fuel cell technology depends crucially on certain conditions being in place, such as the availability of a nationwide hydrogen infrastructure.”

I ran across this interesting statistic the other day and wanted to comment on it and some of the differences between German and U.S. solar energy policy. (This is the post I hinted at in my piece on the 2011 U.S. Solar Market Insight report yesterday.)

First of all, some more stats:

So, basically, while the U.S. is now considered the most attractive country in the world for solar power, by far (by Ernst & Young, at least), and everyone in the industry has its eye on the U.S. and/or is trying to get a big foot in the door, taking a look at solar energy capacity compared to electricity demand should be humbling.

Now, the thing I noted yesterday, in that U.S. Solar Market Insight post, is that the majority of U.S. solar power growth has been in the utility-scale and commercial-scale solar categories. Additionally, that’s expected to continue, as a number of large CSP plants are in the pipeline and current trends in the PV sector are expected to continue along the same lines, as well.

On the other hand, “80 percent of the solar installed in Germany was on rooftops and built to a local scale (100 kilowatts or smaller – the roof of a church or a Home Depot store),” John noted several months ago.

Putting 2 and 2 together, Germany has put solar panels on a ton more of its houses than the U.S. That’s decentralized solar power than benefits citizens even more than centralized solar power. Imagine if the U.S. were more ambitious about decentralizing our electric grid and putting more solar panels on homes and small businesses…. Well, if you remember John’s post from October, we could power the entire U.S. with rooftop solar by 2026.

However, this isn’t the first time SunPower and GRID Alternatives have teamed up. They’ve got a (in the solar industry) long relationship in this arena. “SunPower has worked with GRID Alternatives for the past six years to help hundreds of families in need, providing more than 1,000 employee volunteer hours, philanthropic gifts, equipment donations and sales. This partnership is expected to generate a combined $10 million in electricity savings for these families over the life of the systems.” That’s impressive.
“Partnering with GRID Alternatives aligns perfectly with SunPower’s commitment to building clean-powered communities around the world, and in this case, right here in our backyard.” said Tom Werner, SunPower president and CEO. “By providing GRID with the highest efficiency, highest-reliability solar panels commercially available today, SunPower is helping families in need to reduce their electricity costs over the life of each system, while our employees support local volunteerism.”

GRID Alternatives has power with other solar panel providers, as well, over the years. “Since 2004, GRID Alternatives has installed over 1700 solar electric systems and provided hands-on solar installation training over 8000 community members statewide. These systems represent over 4.7 MW of generating capacity, which translates to over $44 million in energy cost savings over the systems’ projected life spans, while preventing 148,000 tons of greenhouse gas emissions.” There are many non-profits out there that are worthy of support, but this one definitely deserves a spot at the top.
In addition to the work above, GRID Alternatives manages the Single-family Affordable Solar Homes (SASH) Program, which is part of the California Solar Initiative.

SunPower tops the chartswhen it comes to residential solar installations in California, and it achieved the Guinness Book of World Records Award for “the most efficient commercially available photovoltaic modules on the market” last year. Its solar panels will benefit these low-income residents a ton.
Kudos to SunPower and GRID Alternatives for this great partnership and work.

Mars Chocolate has unveiled a new solar garden (aka solar farm or solar power project) at its Henderson chocolate factory in Nevada. Mars Chocolate produces M&Ms, as you may well know, as well as Las Vegas’ Ethel M chocolate and numerous other chocolate and candy options.

The new solar project provides the chocolate factory with 100% of its electricity. On Thursday, state and local government officials, executives from NV Energy, juwi solar Inc. (JSI), and Mars Chocolate North America leaders cut the ribbon on the new solar garden (just sounds nicer, doesn’t it?). Here are some details on the project:

It’s not the largest solar project in the world, but it does what it needs to do and cuts a slice out of some overabundant greenhouse gas emissions.

This isn’t Mars’ first foray into solar energy, of course. As I reported back in 2009, Mars turned on a solar garden at its headquarters in New Jersey back in November of that year. I remember a commenter getting on me for not including a photo of that project at that time — luckily, Mars released a photo of this new solar garden with the announcement in Vegas.

“At Mars Chocolate North America, we have the opportunity to make a difference in the world,” said Mike Wittman, vice president of supply. “We are proud of the investments we are making to ensure we are using the earth’s resources responsibly. This newest solar garden moves us closer to our goals of eliminating our carbon footprint at our sites by 2040 and using 100 percent renewable energy.”

No matter what you think of prepackaged chocolate, you have to appreciate that goal and this new solar project.

Additionally, over 700,000 annual visitors to the adjacent Ethel M Botanical Cactus Garden will be able to view the solar garden from a special vantage point dedicated to that. That’s one thing we sorely need — more eyes on live solar projects. It inspires others to follow suit, or at least helps to plant the idea in their heads.

Here are a few more details on the project:

“Mars will purchase all of the energy generated by the solar garden and JSI will own the project and its associated energy credits. Mars worked closely with NV Energy to ensure that the new installation met net metering requirements, enabling Mars to receive energy offsets from the utility based on the amount of energy their solar panels will produce.