In a move linked to its massive blackout last summer, India is getting a ring of wave power plants along its coastline from the Israeli company SDE. In terms of the global competition for renewable energy leadership, that puts the U.S. way back in the pack. SDE is already building wave power plants in China and several other countries, and Scotland’s wave power industry is coming on strong. Meanwhile, mostly cricket chirps from the most powerful nation on earth….

Lessons from the 2012 India Blackout

The blackout in India last summer was a history-making one, affecting 670 million people or about 9 percent of the world’s population.

Spared were individual companies and villages that had their own off-grid power plants, including a remote village that had its own solar power array. Officials in the state of Jodhpur also credit wind turbines with providing enough energy for hospitals and vital infrastructure, while enabling them to restore power to the region while other parts of India were still many hours away from relief.

Until now, Indian companies seeking to shield themselves from grid disruptions have had to rely on building their own fossil fuel power plants. However, India’s rapid industrialization is headed for a three-way collision course with rising oil prices and environmental issues, making wave energy an attractive alternative.

SDE estimates that energy from its wave power plants costs only two cents per kilowatt hour, making it an attractive bottom-line alternative as well as a clean one.

The wave power projects in India will put SDE in partnership with the country’s automobile industry and other companies, along with electric utilities and local governments.

For Indian companies with an eye on global markets, access to low-cost wave power could also provide a significant competitive edge. It’s becoming commonplace for companies to tout their access to clean energy as a selling point for their products and services, and a recent study commissioned by the wind turbine company Vestas suggest that more consumers prefer to buy from companies that use clean energy.

Wave Power in the U.S.A.

To be fair, the U.S. has been playing wave power catchup with some support from the Obama Administration. Though a full-scale commercial wave power project has yet to launch in U.S. waters, the Navy set up the nation’s first ever grid-connected wave power plant to provide energy for a base in Hawaii back in 2010, with the U.S. company Ocean Power Technologies. Also in Oregon, the Northwest National Marine Renewable Energy Center (NNMREC) at Oregon State University has launched a wave power test facility off the state’s coast.

Ocean Power Technologies is now preparing a new wave power operation for a community on the Oregon coast, and the company Ocean Renewable Power has just started operating a small pilot tidal power project on the coast of Maine.

Meanwhile, the Navy is upgrading its facility to serve as a shared test bed for additional private companies to develop new wave power technology.

Things are just getting started but the U.S. Department of Energy has estimated that wave and tidal power could provide 15 percent of U.S. energy needs by 2030.

Don’t look now, but Australia is setting itself up to ride the wave to a tidal-powered clean energy future. In a nation long known as one of the coal capitals of the world, the ocean’s potential to provide electricity without emissions gets clearer every day. 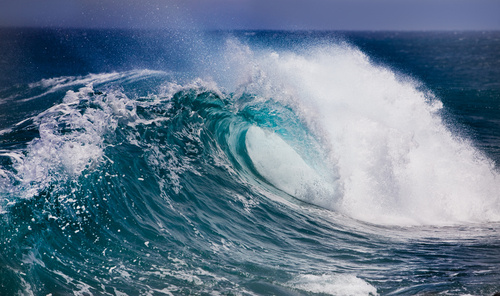 A new report from the Commonwealth Scientific and Industrial Research Organization (CSIRO), the national scientific research entity, found the motion of the ocean could supply about 11 percent of Australia’s electricity by 2050. This power could be generated across as little as 150 kilometers of coastline, depending on the installed technology, and could be reliably forecast three days in advance.

The finding is a big deal for a nation where 80 percent of the population lives along the coast, and is equivalent to powering Melbourne, Australia’s second-largest city.

Potential along Almost Every Coast

Wave-power potential is greatest along the country’s southern coastline, driven by strong winds that generate consistently large waves, but it is also notable near Australia’s eastern coast, alongside its main population centers. The study mainly cited tidal energy, but also examined the niche potential of ocean thermal power to supply local power needs along the northern Queensland coast.

Notable Hurdles in the Way

While ocean energy’s potential is massive and ought to be explored, the study also found significant hurdles in the way. Researchers note that ocean currents can move over time, meaning infrastructure built in one area may not always be ideal. In addition, the ocean energy industry is still working to build generator blades large and strong enough to withstand constant use and corrosive conditions.

Environmental, economic, and cultural considerations could also prove prohibitive, including impacts to marine protected areas, indigenous land rights, shipping lanes, defense, and recreation. The report also notes wave energy’s future hinges on the success of Australia’s carbon tax, which began operation this year but has been threatened with repeal by the country’s opposition political party.

Wave Energy Cresting across the Country

The world’s largest wave energy project, a 19-megawatt installation, is also expected to begin construction in 2013 off the southeastern state of Victoria. The joint public-private effort between Lockheed-Martin, Ocean Power Technologies, and the Australian government should start generating electricity in 2014 and be fully online by 2017.

Australia’s navy is also moving full-steam toward wave power. HMAS Stirling, the largest naval installation in the country, recently signed a power supply deal to secure electricity from an installation of submerged buoys off the western coast of Perth.

Like most renewable energy technologies, wave power is expected to become more affordable and cost-competitive as additional testing is completed and more projects come online. One recent estimate found wave energy will drop to $100 per megawatt-hour (MWh) by 2020 – a price on par with offshore wind.

Wave energy is still in its nascent stages, but CSIRO’s report means it could soon grow to a tidal wave in Australia’s clean energy future. “Assessing the opportunities and challenges from resource to the market is a first for ocean renewable energy,” said Ian Cresswell, the report’s director.